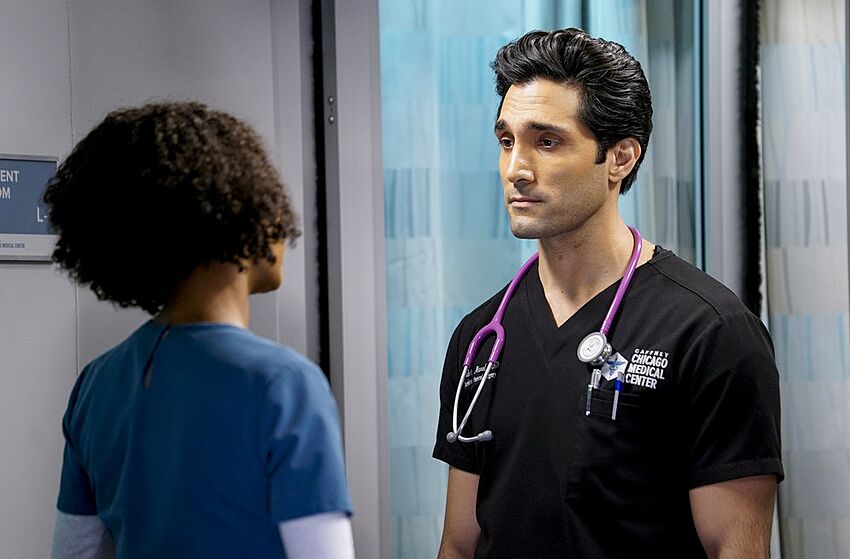 Chicago Med’s Diane Frolov and Andrew Schneider discuss April’s next moves, Will’s future and what else is ahead in Chicago Med season 5.

Tomorrow’s Chicago Med midseason premiere will bring One Chicago fans back to a hospital with a lot of turmoil—so how exactly will characters resolve their personal issues? Will they be able to resolve them?

One Chicago Center spoke to showrunners and executive producers Andrew Schneider and Diane Frolov to preview the return of Chicago Med, including the future of Chexton and whether viewers will learn more about Dr. Crockett Marcel (Dominic Rains).

Plus, they told us whether or not the show’s episode titles serve a purpose. Learn that and more in our interview, before you tune into the new Chicago Med episode this Wednesday, Jan. 8 at 8:00 p.m. ET/PT on NBC!

One Chicago Center: How much of a time jump will we experience when Chicago Med returns?

Diane Frolov: It’s been [some] time. We’ve been gone for six weeks.

Andrew Schneider: Ethan’s back from deployment.

OCC: Speaking of Ethan, April “considers” talking to him in the midseason premiere. So is it possible that she doesn’t confess to him and this is an issue that extends over multiple episode?

AS: Its’ a big deal. April has these unresolved feelings for Crockett and it weighs on her. It gnaws on her because she doesn’t want to have these feelings, but she can’t dismiss them.

DF: She also hasn’t told Ethan about her whole problem with having a baby. So there’s two things that she needs to tell him.

OCC: Is he going to come back from deployment any different? Will anything that happened to him there be part of Chicago Med‘s storylines going forward, or is this primarily about him and April?

DF: It gave him a period to reflect on the relationship and give him perspective, so he comes back–

AS: –Reinvested in the relationship and wanting to make it work.

OCC: Will this storyline also give us an opportunity to explore Crockett’s backstory? It seems like we still don’t know him very well yet.

OCC: On the opposite end of the spectrum, Chicago Med had Dr. Will Halstead making a very emphatic statement that he was over Natalie. But Will has moved on before and come back to her. So how seriously should we take him this time?

DF: Yeah, very seriously. He had a [personal] growth in the first half of this show, where he did not say that lightly. He meant it.

OCC: With the emphasis on people’s romantic lives in the first nine episodes, will we see more medical storylines in the rest of Chicago Med season 5? Or how will you balance the two parts of the show out? AS: We will always balance it out.

DF: That’s really our goal, is to balance it as much as we can. We have some very big medical stories coming up, but we still keep the emotional stories going. We try to make sure our medical stories are reflections [of] what’s going on with the characters.

OCC: What are some of those other things happening in the remaining Chicago Med episodes?

AS: There’s a big continuing storyline which kicks off, in a way, in episode 10. [In episode 11] a plane goes down at O’Hare [International Airport].

DF: Will and Natalie could come back and what directions those two characters are going to go in. That’s going to give us a lot. We’re going to have a separate journey for Will.

DF: We’re [also] very excited about Maggie’s journey, and Ben, and that relationship.

AS: Two people that met in cancer treatment and how they’ll be going forward. It’s a very good story.

DF: And we’re also the complexity of the April/Crockett/Ethan triangle and how that impacts the stories.

OCC: You also have a Natalie and Sharon Goodwin storyline in the 11th episode. Was it fun to put them together since they don’t share many scenes normally?

AS: It’s always good to put them together.

DF: And we’re also going to bring Gwen into that story, so we’re going to see another side of her as well. That was really fun.

OCC: We’ve been speculating about if Chicago Med‘s episode titles. Is the titles having the same number of words as the season on purpose?

DF: It was intentional.

For the latest Chicago Med season 5 spoilers and news, plus more on the entire series, follow the Chicago Med category at One Chicago Center.